HKube is a cloud-native open source framework to run distributed pipeline of algorithms built on Kubernetes.

HKube runs on top of Kubernetes so in order to run HKube we have to install it's prerequisites.

This command installs HKube in a minimal configuration for development. Check production-deployment.

There are three ways to communicate with HKube: Dashboard, REST API and CLI.

Dashboard is a web-based HKube user interface. Dashboard supports every functionality HKube has to offer. 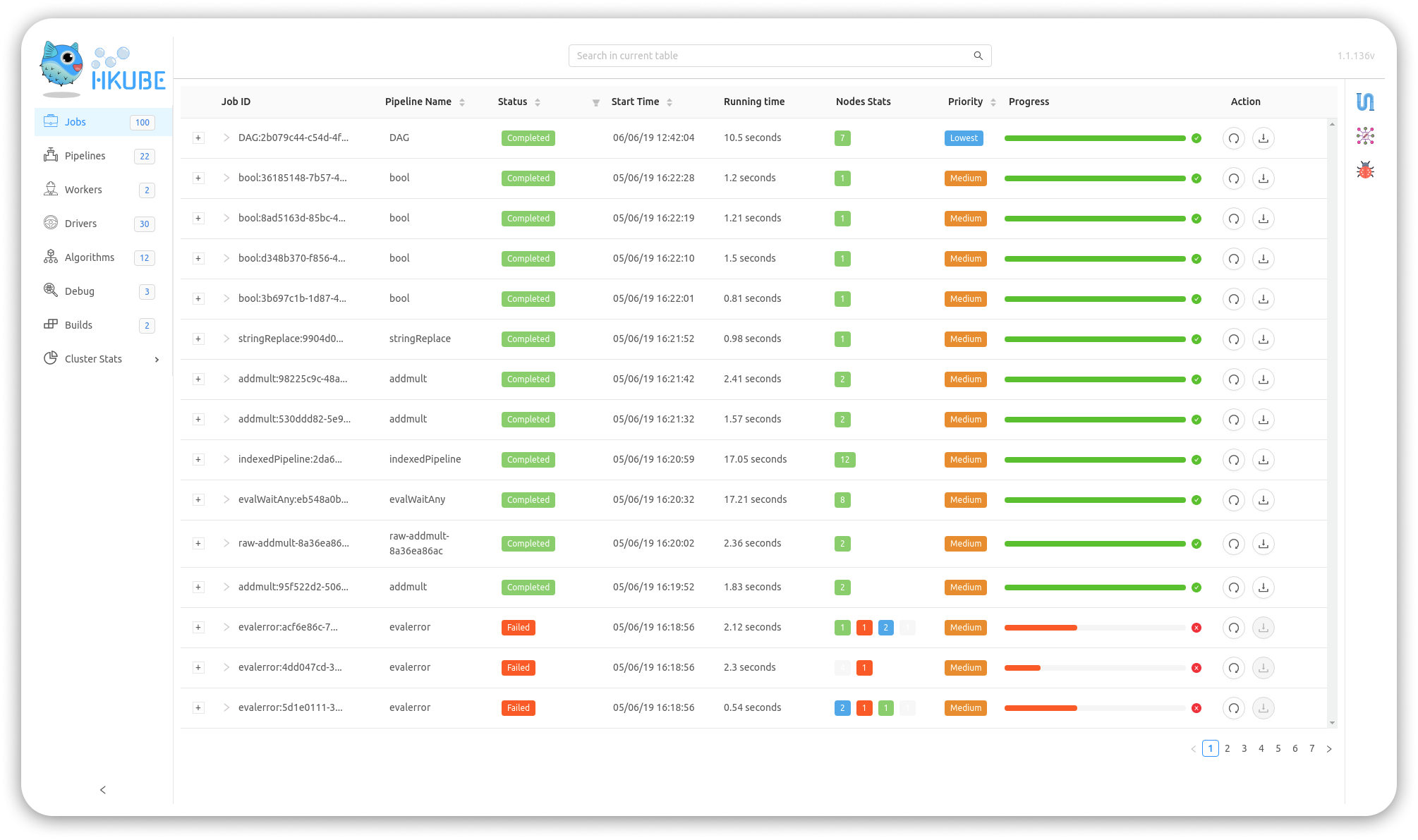 Config hkubectl with your running Kubernetes.

Make sure kubectl is configured to your cluster.

HKube requires that certain pods will run in privileged security permissions, consult your Kubernetes installation to see how it's done.

We want to solve the next problem with given input and a desired output:

We will solve the problem by running a distributed pipeline of three algorithms: Range, Multiply and Reduce.

Creates an array of length N.

Multiples the received data from Range Algorithm by k.

The algorithm will wait until all the instances of the Multiply Algorithm will finish then it will summarize the received data together .

We will implement the algorithms using various languages and construct a pipeline from them using HKube.

The pipeline descriptor is a JSON object which describes and defines the links between the nodes by defining the dependencies between them.

In our case we used:

(@)  —  References input parameters for the algorithm.

(#)  —  Execute nodes in parallel and reduce the results into single node.

(#@) — By combining # and @ we can create a batch processing on node results.

We created a pipeline name numbers.

The pipeline is defined by three nodes.

In HKube, the linkage between the nodes is done by defining the algorithm inputs. Multiply will be run after Range algorithm because of the input dependency between them.

Keep in mind that HKube will transport the results between the nodes automatically for doing it HKube currently support two different types of transportation layers object storage and files system. 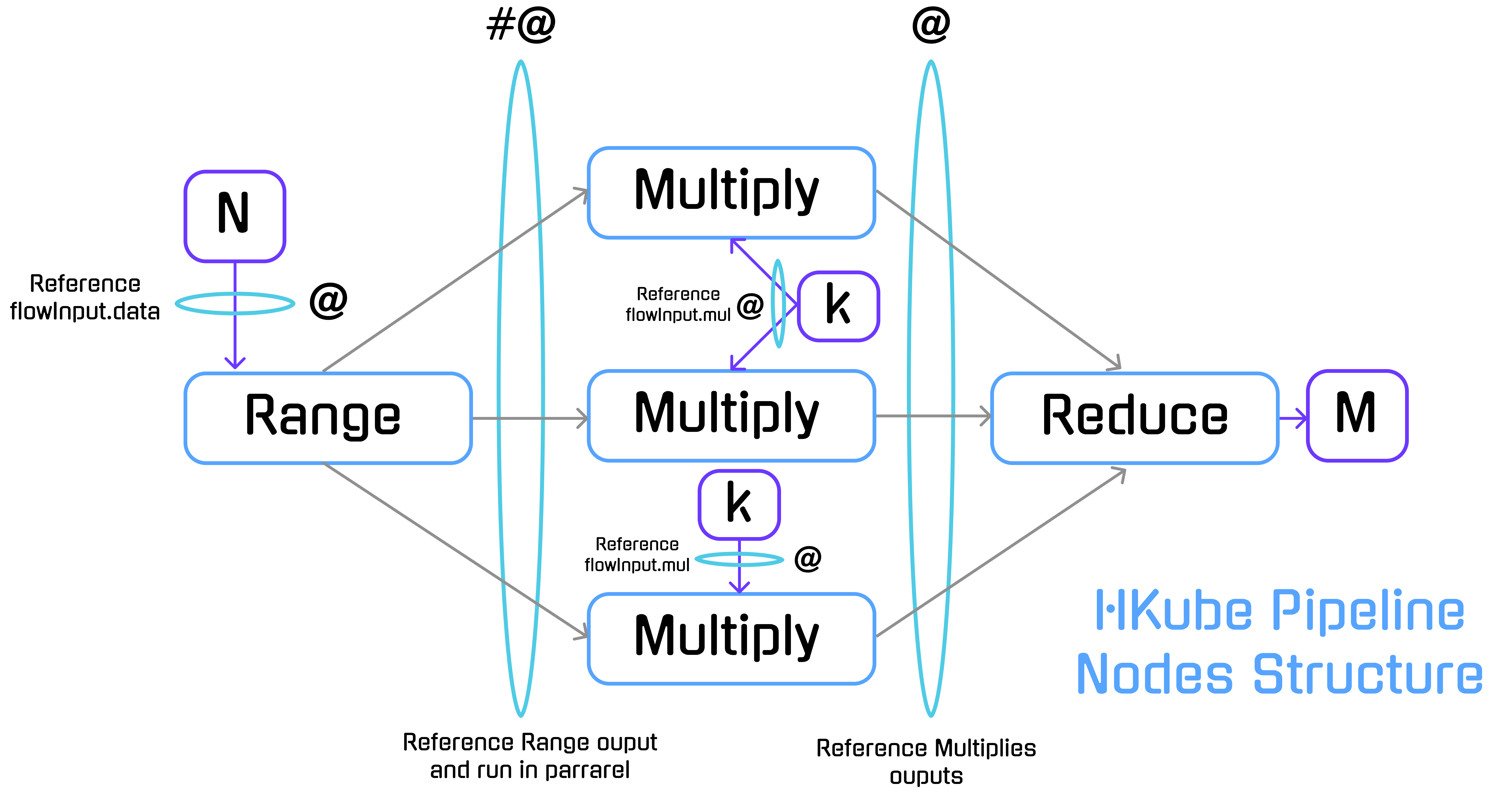 The flowInput is the place to define the Pipeline inputs:

In our case we used Numeric Type but it can be any JSON type (Object, String etc).

There are more features that can be defined from the descriptor file.

The pipeline is built from algorithms which containerized with docker.

There are two ways to integrate your algorithm into HKube:

We will create the algorithms to solve the problem, HKube currently support two languages for auto build Python and JavaScript.

The start method calls with the args parameter, the inputs to the algorithm will appear in the input property.

We sent two parameters "input":["#@Range","@flowInput.mul"], the first one is the output from Range that sent an array of numbers, but because we using batch sign (#) each multiply algorithm will get one item from the array, the second parameter we passing is the mul parameter from the flowInput object.

We placed ["@Multiply"] in the input parameter, HKube will collect all the data from the multiply algorithm and will sent it as an array in the first input parameter.

After we created the algorithms, we will integrate them with the CLI.

Can be done also through the Dashboard.

Create a yaml (or JSON) that defines the algorithm:

Add it with the CLI:

Keep in mind we have to do it for each one of the algorithms.

Create a yaml (or JSON) that defines the pipeline:

For running our pipeline as raw-data:

Stored - Storing the pipeline descriptor for next running #

First we store the pipeline:

Then you can execute it (if flowInput available)

For executing the pipeline with other input, create yaml (or JSON) file with flowInput key:

Then you can executed it by pipeline name:

As a result of executing pipeline, HKube will return a jobId.

This is a unique identifier helps to query this specific pipeline execution.